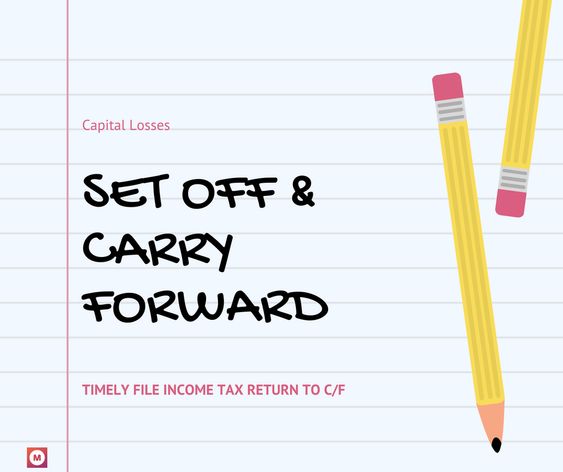 Have you ever come across any discount vouchers?

If yes, then you can relate that with income tax losses.

A discount voucher cannot be encashed, however, it can be used for purchasing selected goods or services.

Similarly, under Income tax act, loss arising from an “income head” can be set off with prescribed income head only and government never compensate for that loss.

In many cases, losses are taken ahead to 8 assessment years for setoff purpose.

Under income tax we have 5 income heads:

Each head has its own rule for setoff and carryover.

In this article, we will cover set off and carry forward rule for the income head “Capital Gain”.

Basic Rule For Set Off and Carry Forward

Loss from an exempted source of income cannot be adjusted against taxable income.

Example: Loss on sale of long-term listed Equity Share is neither eligible for set off nor for carry forward. [Applicable For Assessment Year 2018-19]

But from AY 2019-20, LTCG on such equity instruments exceeding Rs.1 lakh are to be taxed at 10% and loss arising from a sale of such instruments on or after April 1, 2018, can be set off and carried forward. [Introduced in Budget 2018]

Recommended to Read: LTCG Tax on Sale of Listed and unlisted Shares

Set Off and Carry Forward of Capital Losses [Under Section 74]

Based on the period of holding, capital Gain (also include loss) are divided into 2 parts:

Law doesn’t permit the set off of a capital loss with other 4 income heads. [Inter head setoff not allowed]

However, a short-term capital loss can be set off with both short term and long term capital gain during the financial year. [Intra head setoff allowed]

Further, if such loss is not fully adjusted with the gain/profit under the head “Capital Gain” then such loss can be carried forward to the next 8 years until the loss is finally adjusted. [Also known as unabsorbed Losses]

Similar to STCG, loss on long-term capital asset can’t be set off with other heads of income.

A long-term capital loss can be set off only with a long-term profit/gain.

If an LTCG loss is not fully adjusted with the LTCG gain/profit of other long-term capital assets then such loss can be carry forward to the next 8 years until the loss is finally adjusted.

In order to carry forward both LTCG and STCG losses, a taxpayer should file a loss income tax return (ITR) within the prescribed due dates. [under section 139(3)]

For the purpose of loss carry forward, Capital loss in a revised return is also a valid return even if the original return was without any loss.

However, for various other capital assets government has reduced this 36 month period to–