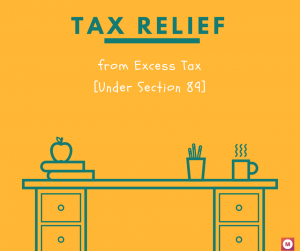 Suppose a year’s income with low tax rate get taxed in a year of a high tax rate than the taxpayer ends up paying more taxes.

To remove this burden from salaried taxpayers a tax relief under section 89 was introduced.

Which says that if an individual receives any portion of his salary in arrears or in advance or receives profit in lieu of salary, he can claim tax relief (u/s section 89 read with rule 21A)

Following are the situations where tax relief under section 89 can be claimed:

Exceptions: Situation where tax relief is not available

Under following situations tax relief u/s 89 is not available if exemption under section 10(10C) already claimed:

Calculation of Tax Relief under Section 89

Basically, the calculation of relief under section 89 is arithmetical.

To get that we need to find out two amount income tax for a particular year.

The first is the tax amount on the total income including the extra salary amount.

The second is the tax amount on the total income without the extra salary amount.

I will guide you through the entire process step-by-step.

The relief of additional salary received as arrears or advance is computed in the manner laid down in rule 21A(2) as under:

Calculate the tax payable on the total income, including the additional salary, of the relevant financial year in which the same is received.

Find the difference between the tax at step#1 and step#2.

Compute the tax on the total income after including the additional salary in the financial year to which such salary relates.

Compute the tax on the total income after excluding the additional salary in the financial year to which such salary relates.

Find out the difference between tax at step#4 and step#5.

If the additional salary relates to more than one financial year, the salary would be spread over the financial years to which it pertains in the manner explained above.

The admissible relief under section 89 in respect of bonus paid in the financial year 2016-17 will be computed as under:

So, in this case, tax relief will be zero.

This form needs to be filed before filing income tax return.

To do this, you need to login to e-filling website.

For TDS deduction on salary, your employer may ask for the acknowledgment of submission of Form 10E before adjusting your taxes and allowing tax relief.

After return filing, to prove your relief claim, you may be asked by the tax authorities to submit few documents like salary slip, bank statement, the tax return of prior periods etc.